Lieutenant Commander Matthew Reddy, along with the men and women of the USS Walker, have chosen sides in a war not of their making. Swept from the World War II Pacific into an alternate world, they have allied with the Lemurians: a mammalian race threatened by the warlike reptilian Grik.

The Lemurians are vastly outnumbered and ignorant of warfare, and even the guns and technology of Walker cannot turn the tide of battle. Luckily they are not alone? Reddy finally finds Mahan, the other destroyer that passed through the rift. Together, the two American ships will teach the Lemurians to make a stand. Or so they think.

For the massive Japanese battleship Amagi, the very ship that Walker was fleeing from when the rift took them, has followed them through. And now the Amagi is in the hands of the Grik.

Things are starting to heat up for Captain Reddy, his crew, and their new allies in Crusade. A lot of the initial worldbuilding for Destroyermen got taken care of in the first book. So, this time around there is more focus on plot advancement. By the time I got around to writing this review, I’m already 6 books deep into this series. And so far, it seems like the story arcs can be measured out fairly well. Yes, the overall story is still about fighting the Grik. But it can be broken down into smaller actions, just like a real-world conflict. The first book left a lot hanging, but the story was fairly self-contained. Crusade is more the first half of a two-parter.

At the end of the first book, it’s not 100% clear what the characters are actually going to do next. They know a massive invasion force that will take no prisoners is headed straight for them. A decision has to be made: run or fight. They pick ‘fight’ and a lot of Crusade is the human characters teaching the Lemurians how to get ready in every possible way. That means training in combat tactics, developing new weapons, learning to use those weapons and tactics, and outfitting an overall peaceful society for war.

Much of the book is spent on this prep work. Not just getting it done, but how they go about doing it and the beginnings of ramifications all these changes will bring to Lemurian society. And a lot of this is new to Captain Reddy and his men too. Yeah, they’re Navy, but it’s not like any of them were Admirals commanding fleets before this. Not to mention having to lead ground troops into battle.

And as far as the plot goes, it’s kind of basic. In real life, war is a messy business that (historically) is rarely about the moral high ground. But when you’re up against a take-no-quarters enemy who behaves as such because they’re vicious carnivores that you hope to God will have the good grace to kill you before they start eating you, it kind eliminates any question of good vs. evil. It makes it pretty easy for the protagonists to become shining paragons of honor and heroism. They’re not like Disney-protagonist level good, they’ll get their hands dirty when necessary, but the enemy is clearly much worse.

Destroyermen really reads more like an old serial series than anything else. In the grand scheme of things, not too much actually happens in Crusade, and nothing is really fully resolved. But that’s not at all what this book is trying to do, so it really doesn’t matter. It’s just a fun alternate history military romp. It knows this and does it well. This is not the series to read if you’re looking for something on par with Of Mice and Men. It’s what you read when you want fighting, explosions, and action in a light sci-fi setting. 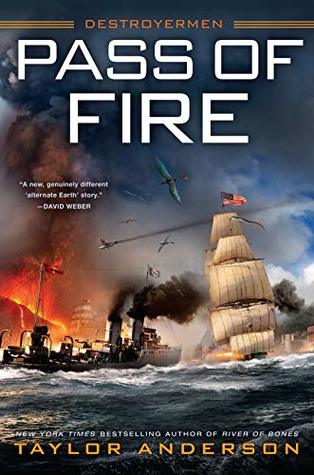